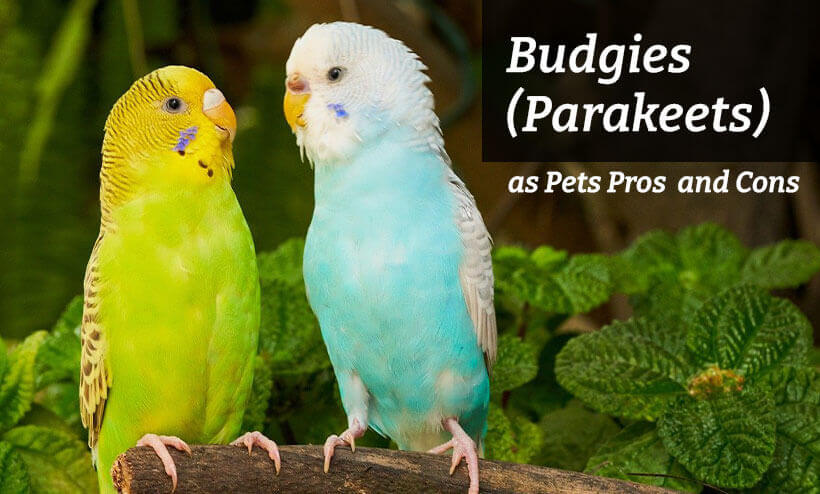 Budgies or Parakeets (the most common name used in America) are considered by many the “starter pet bird”. The title is due to its small size, cheap cost, and because it is relatively easier to handle when compared to birds like lovebirds or cockatoos.

Budgies, Parakeets, or Budgerigars are all the same thing. Many names, a single bird!

Exhibition Budgie or English Budgie is a new “artificial” type of bird created after the 1800s. Still the same species, but different appearance. They are about 2x the size of a regular budgie parakeet.

Budgerigar is an Australian aboriginal name that means “good bird”. Parakeets have also been called shell parrots and zebra parrots in the past.

Budgies or Parakeets aren’t a specific parrot species, but rather a term used to describe any type of small-sized parrot with long tail feathers and a slender build. Budgies are Parakeets, but not all Parakeets are budgies.

Budgies are typically light green bodies mixed with yellow and have black dots framing their faces. However, it’s not so hard to find budgies with blue and other color mutations these days as well.

They can have a large assortment of colors and patterns, over 70 mutations to date, with more developed each year.

Budgies in the nature

In nature, the Budgies live exclusively in Australia, where they cross wooded forests and coastal areas to forage on various seeds, nuts, fruits, and vegetables.

Australia banned the export of parakeets in the 1800s due to extensive trapped. All the birds that we see today as pet birds were bred in captivity.

Budgies usually live around 5-8 years in the wild.

In captivity, Budgies are supposed to last 7-15 years, but they are living shorter lives because of inbreeding and bad genetics. Some can live only 3-5 years.

Another reason for their shorter lives is poor living conditions. They are often fed on high-fat diets and they’re not given enough exercise.

Budgie Parakeet’ Pros – Reasons for getting a Parakeet

Budgies’ Cons – Why you shouldn’t get a parakeet?

The Budgie Parakeet is often underrated as a hands-on pet. It is certainly good as a “watching only” pet bird, especially if kept in pairs or in a colony. However, it can be hand-tamed and can become a loyal, loving little friend to a patient owner.

The younger the budgie is, the easier it will be to train and bond with, but older budgies need love too! When imprinted and tame, they sit on your finger, ride on your shoulder, cuddle with you, fly around your home, come to you when called and give you kisses. What a sweet bird!

Are Budgies good pets for children?

Budgies are the perfect birds for beginners or children (if they respect them). They are known for being relatively laidback. They do not bite hard, they’re fun and curious. As long as you are gentle and kind, they will be happy to spend time talking with you and learning tricks.

Is it better to have one parakeet or two?

Pairs of birds make good company for each other, but when in living pairs and entertaining one another, they may not bond as well with their owners or mimic speech as fluently.

It’s better that you bond with that bird for a couple of months before getting another.

Every bird is somewhat loud, but budgies are one of the quietest ones. They don’t squawk as loud as conures or large parrots, but they might make sufficient noise for your neighbors to hear them if you live in an apartment. If you leave the windows open, you will probably be able to listen to them across the street, especially if you have a group of them.

Another important thing to be aware of is that they produce constant noise while they are chattering. They love to chirp and make a variety of silly little noises to express how they feel and to communicate with others.

Generally, birds will only get really loud if something is wrong. Either they’re stressed or spooked about something they saw, such as a cat across the window or an ambulance with loud sirens.

They can also shriek when they are lonely, but also when they want to fly freely or when they are bored. Same as dogs barking when need to pee outside.

How loud can Budgies be?

Budgie chirps and whistles are usually around 65-70 decibels. The loudest calls can read 111-112 decibels.

There are some debates whether Budgies are louder than Cockatiels, but if I were to bet on a screaming competition, I would definitively put my money on Cockatiels.

However, if you want absolute silence, seriously, don’t get bird at all. They will make some noise.

Despite their tiny size, Budgie Parakeets have big brains! They are just as intelligent as some larger bird species.

Disco, the parakeet on the video was four months when brought home. The owners started talking to him right away; he started talking three weeks later. They started by using just one phrase – “pretty bird” – and then once he got that down, they started a new one. Just take your time, be patient, and keep talking!

The budgie can be considered one of the best talking birds among the parrots, able to learn words, phrases, and whistles easily. Males are the ones that have an easier time learning how to talk, but females can also learn a few words.

Meaning they can doesn’t necessarily mean they will. Teaching them to talk can be a long journey and it might work or not. Please don’t get a Budgie only counting on it to talk.

Budgies are prone to tumors, goiters (due to iodine deficiency), and other conditions related to an all-seed diet, psittacosis as well as scaly face/leg mites (which presents as scabs around the nare and eyes and/or legs).

Budgies are also prone to obesity (due to poor fatty diets and poor exercise), fatty tumors and liver, foot disorders, and intestinal parasites, all of which require veterinary care.

Obesity can decrease a bird’s lifespan by 70 percent.

How do I tell a male from a female Budgie Parakeet?

By the color of their cere (the fleshy part above their beak and around their nostrils. A male’s cere is blue whilst a female is tan, brown, white, or white with a little pale blue.

Are male Budgies louder than females?

There is a tendency for male Budgies to make more constant noise than females. They tend to chirp and whistle more. However, it is reported that females are louder and tend to be more cuddly.

With birds, the rule for cage sizes is: the bigger the better!

The spacing of the cage bars should be half an inch or less to avoid escapes and to prevent your bird from getting stuck. Horizontal cage bars offer the best opportunity for climbing and exercise.

Not at all!! Budgie Parakeets are very clean creatures. If you give them a bathtub, they will gladly take baths every day. They preen themselves constantly.

If there is any detectable odor at all emanating from a parakeet, it is most likely an indication that it has some sort of fungal or bacterial infection and veterinary assistance should be sought out. The droppings will also smell if you don’t clean the paper under the cage for too long.

Budgies/Parakeets are, unfortunately, the betta fish of the bird world. Because they’re so small and not so demanding as other birds, people tend to give their first “try” in the bird world with this one and do not put effort into knowing more about them.

The problem is just because something can “survive” in a tiny space doesn’t mean it should. Even though they are the most common beginner bird, it doesn’t mean people shouldn’t put effort into learning about them and providing them with a good environment to live.

Because Parakeets are so cheap, people tend to impulse buy them when they see them at the pet stores. They see their cute faces and don’t realize that owning a bird means a commitment.

They will need a cage, and they will need toys for enrichment since, like any parrot, they’re quite intelligent.

Besides that, Parakeets will also require vet care, which is very expensive. In the end, some people end up just letting them die since they’re cheap, which is pretty messed up. Don’t they deserve better?

In conclusion, Budgie Parakeets are lovely birds to have at your place if you don’t bird a bit of constant chirping. They’re fun to interact with and to literally just watch.