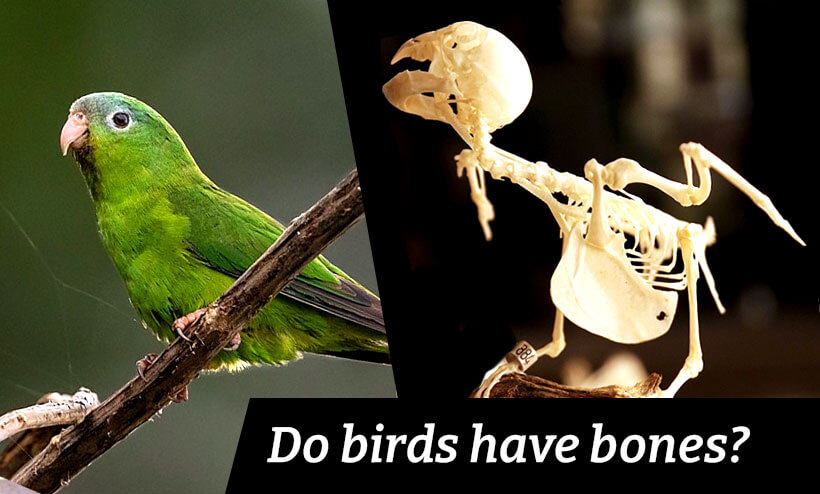 Some people think that birds don’t have bones and that’s why they can fly.

Truth is: they do have bones, but they hold a special secret: they are hollow inside! The hollow bones help the air flow through their bodies more efficiently.

Is it true that birds have hollow bones?

Yes, it is true! In fact, if a bird flies, it will probably have some hollow bones in its skeleton, although that doesn’t mean flightless birds also don’t have hollow bones.

Hollow bones doesn’t make birds lighter. In fact, bird skeletons don’t weigh any less than mammal skeletons of the same size. After all, thin, hollow bones are more fragile, so they’d need to be made of much denser material to keep from breaking all the time.

Birds have the most dense bones when compared to several different animals. The density of their bones increases their stiffness and strength to resist against air resistance during takeoff, flight, and landing, with a minimum of weight.

The hollow bones also called pneumatized bones, have hundreds of hollow spaces inside, designed for pockets of air to flow in while the bird is flying. It’s like their bones are also lungs!

They help birds take in oxygen at the same time as inhaling and exhaling. This extra oxygen boost to the blood ensures birds have extra energy for flight. Imagine how awesome it would be if they could play an air instrument, such as a saxophone!

A bird’s respiratory system is set up very differently than ours. For starters, their lungs are 50% larger than ours. Attached to a bird’s lungs are eight or nine (up to eleven) air sacs, that are hollow balloon like sacs that hold air and act like bellows. That way, birds are capable of breathing through its lungs, air sacs, and bones all of the same time.

They have something called circular breathing and it’s great for flight and getting as much oxygen out of air as possible to feed their large flight muscles. Additionally, air is moving around in one direction, which allow birds to always get a “fresh breath of air” when they breathe in (no old air moving out past it and mixing).

Flight type is determined by bones and feathers

In most cases, birds’ skeletons extend only half-way from the shoulder and rest of the wings are supported by the primary feathers. The primary feathers don’t have any freedom of movement since they are rigidly attached to the bone. Secondary feathers, on the other hand, allow for the bird to move up and down, more or less like our wrists. They have a thumb-like feather that moves independently and act as a wing slot to increase lift.

Birds also have a structure that they share with their dinosaur ancestors: a fused clavicle (collarbone) called the furcula (wishbone), which serves as a brace during the flight stroke.

Even though ostriches and emus don’t need the extra oxygenation from the hollow bones to fly, they benefit from another particular feature that comes with this type of bone: insulation.

Living in extreme heat regions, they often have to deal with overheating and that extra air flowing through their legs helps them to cool down.

Birds such as penguins don’t need to be lightweight because they don’t need to fly. In fact, they need to be heavy so they can actually dive and not float on the surface of the Ocean. The solid bones help them to dive.

There is a bone on bottom of their legs, which is the hardest and is highly enduring, even after the penguin dies. Its short length helps reduce friction when swimming, but it also provides support when the bird stays on land.

Scientists were able to find out that animals have hollow bones since the Pterodactyls era! Their occurence was common during the late Cretaceous period, possibly 75 million years ago. Besides the hollow bones, they also had air sacs to assist their breathing while flying. The same way our present era birds have!

Remember the long neck dinosaur type named Sauropod? They avoided the “pain in the neck” of having heavy bones by evolving to have hollowed bones too. The hollowed bones allowed oxygen to flow more freely into their bodies.

Humans have been fascinated by birds’ ability to fly for many years. Sometimes, the fascination turns into inspiration to do something inventive.

According to Science Direct, the reinforcing struts identified in hollow bird bones inspired the fabrication of a nickel metallic foam with criss-crossing “struts”.

It’s also impossible to not mention that the designs of several airplanes took inspiration from bird wings. Whenever you see an airplane with the end of the wings tips pointing upwards, says thanks to the birds.

Aircraft engineers discovered that the winglets reduce drag by about 20%, and allow wings to provide the same amount of lift with a smaller wingspan.

Birds are incredible animals that make use of a sophisticated respiratory system to allow them to fly. They use their hollow bones as a key element to help them fly. The hollow bones assist their air flow while flying, along with its air sacs and large lungs.