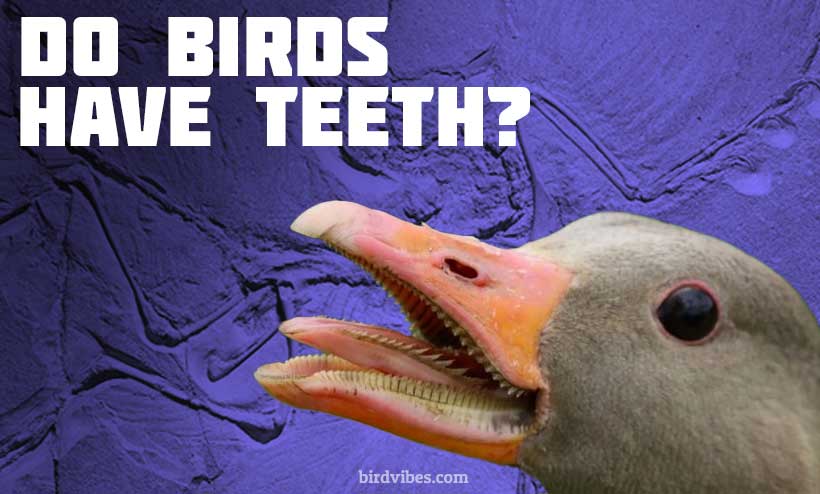 Officially, birds do not have teeth. What some birds like geese have is something that is not technically teeth, but sure looks like it. They have serrated teeth-like protuberances that are basically just textured on their bills.

They remained through evolution because they were found to be useful in tearing up the grass and helping them grip food.

Why birds don’t have teeth?

In a way, birds did have teeth in the past and they were sharp! However, that was many millions of years ago.

If you don’t know already, birds are descendants of dinosaurs. Though they are distant relatives, there is still a deep connection between birds and dinosaurs. Let’s understand how birds gradually lost their sharp teeth over time.

How did birds lose their teeth?

Some people may argue that if birds are descended from dinosaurs, why don’t they have teeth? Well, toothless beaks proved to be more advantageous to their survival.

One of the reasons birds evolved to not have teeth on their beaks is due to an optimization of their reproduction process. Over time, chicks evolved to grow faster by having fewer teeth, especially on their front part. Growing teeth takes more time and energy.

Another reason is that actual teeth require a heavy jawbone and a beak is much lighter than a jawbone. For those early creatures that were carnivores, it turns out that a beak is very efficient at tearing into prey, as it can both puncture and rip, and losing the teeth and heavy jawbone made them more efficient gliders, and eventually, fliers.

How do birds digest without having teeth?

To get around the problem of digesting food without teeth, evolution came up with an elaborate alternative: grit. By consuming grit (little bits of rock), birds developed a digestive organ called a gizzard. The gizzards do all the hard work that teeth would do. It grinds food using the grit consumed by the bird, breaking it into digestible parts.

In other words, the gizzard ‘chews’ the food for the bird because it does not have teeth to chew food the way humans and other mammals do. The dinosaur line that led to birds, for whatever reason, went on to emphasize the gizzard over the chewing teeth and lost the teeth leaving them with just a beak.

To summarize, birds don’t have teeth anymore because they evolved in such a way to save energy resources, especially after the extinction period due to the giant asteroid that hit Earth 65 million years ago.