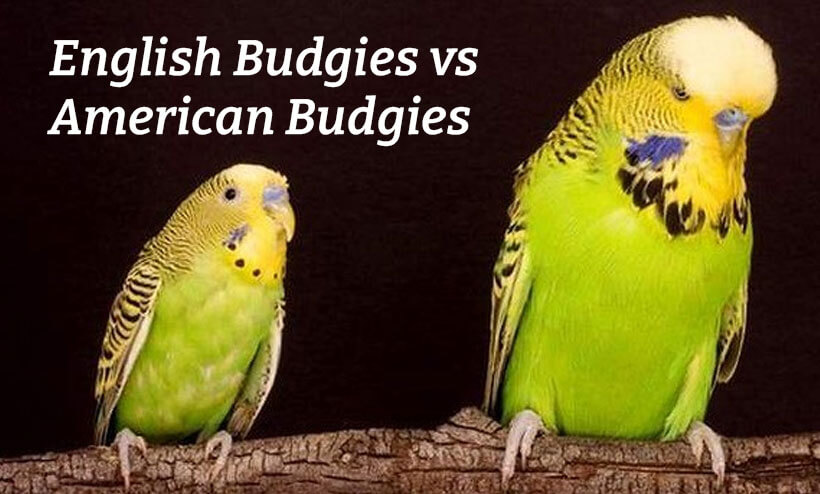 You’re watching Budgies hanging out on a cage and suddenly, you realize there is a big one amidst the group. You may wonder what kind of breed is that. In this article, we will cover the difference in between English Budgies vs American Budgies.

Pet, Wild type, American or Australian budgies are all the same bird.

Exhibition Budgie or English Budgie is a new “artificial” type of Budgie bred after the 1800s.

Basically, there are only one species of budgies (parakeets), but due to consistent breeding experimentation, there is a new type of Budgie called “English Budgie”.

Budgies occur in a large assortment of colors and patterns, over 70 mutations to date, with more developed each year. The fancier mutations are available through hobby breeders, though most people are happy with the standard green, blue, yellow, and white.

English Budgies originate from only about 120 birds that were taken from Australia and bred in captivity. Over time, specific characteristics were selectively bred into the birds. For instance, bigger body, longer head feathers. Then, people started to show them at bird competitions.

It happened in the same way that exaggerated breeding caused dogs to have tiny snots such as Pugs. As a consequence, English Budgies are born with a lot of problems, such as flight restrictions, partial blindness by their own feathers, painful pinnies almost constantly growing. They also live shorter lives.

Can English Budgies and American Budgies Live Together?

They, can. Even though the English Budgie is often 2-3 times larger, it’s the feisty Americans that tend to pick on their larger cousins! English Budgies are pretty chill birds when compared to their cousins.

They have been trained to make as little noise as possible. When he does chirp, he does so quietly. They are less likely to talk.

If you want a bird that is more active and willing to vocalize more, the best Budgie option would be a American Budgie. They are smaller, wilder, louder, and more lively than the English Budgie.

The American Budgie will take more effort to be tamed and to integrate with your family when compared to the English Budgie. They will also live longer and healthier lives. About two years more.

The American Budgies can also preen themselves without your help to clear out feathers from their eyes.

Despite being the same species, the English Budgies and American Budgies have some appearance and behavior differences.