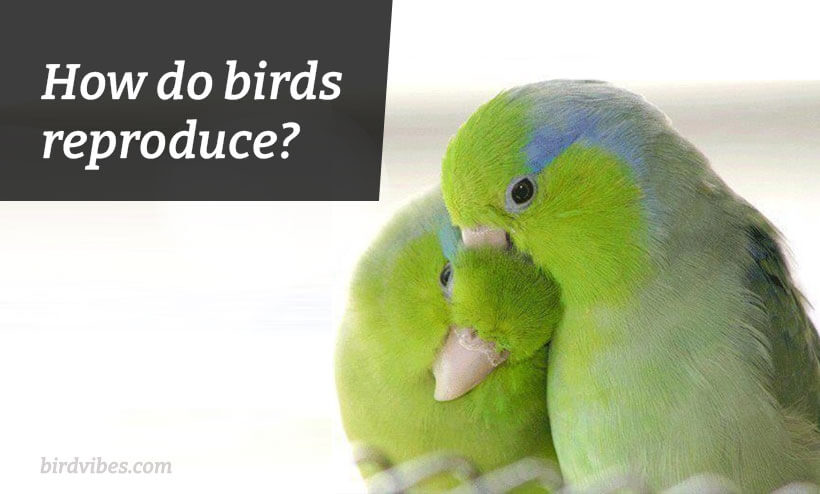 How do birds reproduce? Do birds get pregnant bellies? Let’s find out in this article about bird reproduction.

Birds don’t get pregnant because they are not mammals. Instead, they mate and lay eggs. Fertilized eggs need to be sat on for an average of 21 days to stay warm. After that, they will hatch, the chicks will come out of their eggs and will be tended by is parents.

As mentioned, birds reproduce by laying eggs. They do not get pregnant bellies.

Once female and male birds copulate, the female bird lays an inseminated egg. The chick will grow inside the egg and the parents will sit on it to provide warmth. Most bird parents take care of chicks after they exit the eggshells. They will feed them and provide care still the baby bird is independent enough to leave the nest.

Do birds have genitalia?

Most birds don’t have external female or male genitalia. They all have only one vent opening. Through this opening, called the cloaca, birds will poop, lay eggs, urinate, and have sex.

When birds are sexually mature, their ovaries and testes produce sperms and ova, where males store it in their cloaca until they find a mate. During Spring, their cloacas get swollen and slightly protrude outside of their bodies.

Bird foreplay is quite flashy. For the courtship, males like to dance around and do bobbing movements with their necks. They might bring a treat gift to the female. The couple will exchange a few “kisses” by regurgitating into each other’s beaks (it’s different from actual vomiting). Also, it’s not uncommon for parrots to appear “shaky” and demonstrate heavy breathing due to excitement.

Bird sex is usually quick. It’s so fast some called the “cloaca kiss”. This is how it happens. The male will mount the female as she exposes her cloaca by moving her tail aside. The male will try to reach her cloaca by arching his body, rubbing them together so the sperm can be transferred.

It might be necessary to mount a few times to properly inseminate the female. It’s a somewhat clumsy operation due to feathers in the way and the awkward position during the mounting.

How long do bird eggs develop inside the bird after mating?

After the copulation, the sperm will travel through the female’s reproduction system to inseminate an egg. The duration of this process can vary a lot.

For some songbirds, only a few days are necessary for the female to lay fertilized eggs. However, for bigger birds, such as chickens, it might take around 10 to 15 days.

For comparison, it takes four to five days in small birds like great tits and white-crowned sparrows, six to eight days in larger birds like ducks and pigeons, 10-13 days for large gulls, and up to 16 days in some penguins.

How long does it takes to incubate an egg?

After the female expels the egg, she will sit on it providing warmth until the baby chick is fully developed and can crack the shells.

The general time for egg incubation is from 10 to 30 days. This process can again, vary a lot depending on the species. For budgies, the mother will sit on the eggs for 18 days. Chickens take 21 days. Ducks sit on their eggs for 24 days.

How long until baby chicks leave their nests?

Most birds remain on their nests to raise their brood. Most of these birds are altricial, which means their baby birds are born naked, blind, and completely helpless.

These birds live in a nest or cavity. Over time they develop down, open their eyes, grow feathers, and learn to fly.

This process can take from 10 days to 18 months depending on the species. The usual time for small birds is around 3-8 weeks.

Some baby birds are not so helpless when they hatch. These are called precocial birds. Precocial birds are birds that are self-sufficient the moment they are born. They are born with their eyes open and can find food on their own right after hatching.

They might still need their parents to be around in order to protect them from predators and to provide them with much-needed warmth since their feathers are not fully grown.

Do females birds need a male in order to lay an egg?

No. They will lay eggs regardless of the presence of a male bird. It’s more or less the same way women do.

The difference is that instead of menstruating, birds lay eggs. In the wild, birds tend to lay eggs around Springtime when the mating season comes. They respond to weather clues, such as longer daylight hours and warmth.

Pet parrots don’t have these clues, so they end up laying eggs all year round, which is risky due to egg-bound issues and heavy on their calcium supplies.

Do birds have penises?

Only several types of geese, ducks, and swans have penises. Most birds just have cloacas, which is a multi-purpose vent opening that avians have.

Duck penises have a very curious shape. They are spiral and not surprisingly, the ducks’ vaginas are also spiral in order to accommodate it.

Another interesting fact is, male ducks will grow their penises bigger if other male ducks are around. Apparently, the competition instigates their bodies to grow longer.

If a female disapproves of the male and he forces himself upon her, she has a mechanism on her reproductive system to stop the insemination and avoid having chicks from him. Way to go, girl!

Do birds build nests before they are pregnant?

Well, as mentioned before, birds don’t get pregnant. They lay eggs instead and sit on them still the baby chick is fully developed.

Regarding the nest, it depends a lot. Some birds do build nests before mating, as having a pretty sturdy-looking nest might be a requirement for a female to accept a male bird. Others only bother about building a nest once they have secured a partner.

Birds are hopeless romantic beings. The majority of birds are monogamous, 90% to 95%. This means the male and female remain together for breeding for a few years or until one mate dies.

Do bird males help to raise their chicks?

Unlike most animals, most male birds do stick around to help raise their baby chicks. Since most birds are completely helpless when they are born, it takes a lot of work to keep them alive.

For instance, a pair of American robins usually deliver 100 to 150 meals a day to the nest. Imagine doing all of this on your own? Good thing bird parents act as a team and help to grow a healthy family.