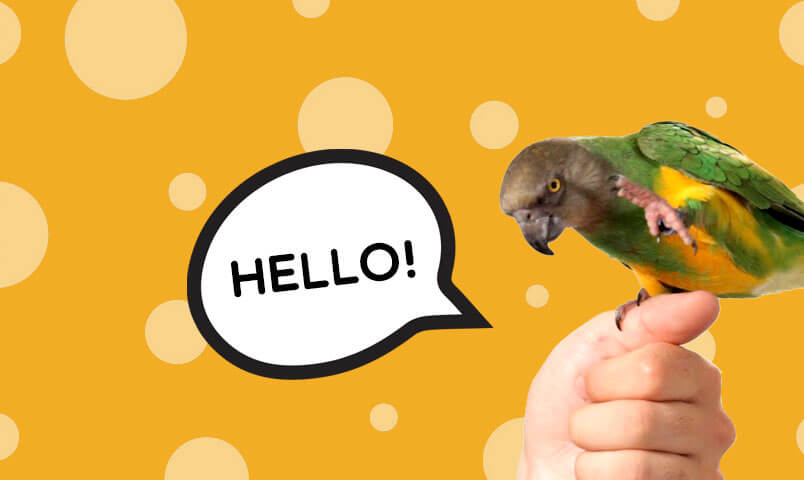 You’ve got a feathered companion that you love very much and with time, you may wonder if it will ever talk. We’re going to discuss this topic in this article

The time can vary a lot because it depends on the bird’s personality, how strong is your bond with it, and how good is your training. It can take a couple of weeks to an entire year to start forming words.

What affects a bird learning how to talk?

There are several facts to consider. Some of them are:

Male birds have a bigger tendency to vocalize more than females. That happens because, in nature, they display courtship behavior to attract females to mate. They also need to vocalize in order to defend territory and to protect themselves against other birds and predators.

However, there are often exceptions to this. Female cockatiels and budgies are capable of learning how to talk if you spend a lot of time teaching them and they choose to do so.

For Amazons and African greys, for instance, the sex of the bird makes no difference in whether or not the bird speaks.

In the same way, as humans can be introverts or extroverts, parrots have different personalities. The personality can directly influence the success of teaching a bird to speak. Some birds might be shy or just not be interested in learning how to talk. In fact, some birds might not ever talk during their entire lives. As a bird owner, you need to accept that and not base your decision on owning a bird uniquely on this factor.

It’s relevant to know that some bird species will speak more clearly than others. Amazons, for instance, will speak clearer than a Quaker parrot.

As discussed in our Why can parrots talk article, it takes an incredibly big effort for a bird to talk like a human.  Parrots have to move their tongues forward and backward to adjust their beak openings to adjust the sounds. To make plosive sounds (like “b” and “p”), they have to do something similar to burping coming from within their trachea.

All the effort is worth it for bonded parrots because they believe their human owner is part of their flock and they’re are obstinate to sing our song.

To summarize, having a strong bond with your bird is essential if you want to teach it how to talk.

Ravens, for instance, can only learn how to talk during their critical period, when their nervous system is especially sensitive to certain environmental stimuli. If for some reason, this organism does not receive the appropriate stimulus during this period to learn a given skill or trait, it may be difficult to learn after.

Another reason why age might affect the possibilities of learning how to talk is the fact that younger birds develop a stronger bond with their first family. As mentioned, a strong bond is a great facilitator for the learning process, because it takes a LOT of effort for a parrot to learn how to talk. It’s an effort that is usually more worthwhile when they are trying to communicate with their humans, whom they consider as part of their flock.

After a certain age, they can pick up new words but it is less frequent.

Parrots might learn how to talk on their own

In fact, birds will learn what birds want to learn and they’ll repeat phrases and sounds for their own amusement. You may not even have a “say” on what they want to learn.

You might be amazed by how much they pick up on their own with no formal teaching.

Before you train your bird to talk

First of all, it’s necessary to mention that you should not have a bird just so it can talk. There are several reasons to have a bird, but to satisfy the ego of owning a “talking bird” is most definitely not the most legit one. Parrots should be loved by what they are, and not by what they can do in terms of tricks. They are lifetime companions and everyone willing to own a bird should know that.

Some birds will simply not learn

Another point to be made is that some parrots will simply never learn how to talk. Maybe because they are not interested or maybe because they have some kind of issue (neurological or vocal related) that might affect that.

Am I okay with repetition?

Before teaching your bird, also reflect if you are going to be okay with the bird repeating sounds over and over. Listening to “Hello” several times a day can be overkill for some owners, so it’s good to be aware of that.

How to teach my parrot how to talk

Now we put together some tips that help you in your journey:

Imagine yourself learning a new language. You have to associate vocabulary within a certain context. The same line of reason happens within the parrot’s brain. If you repeat words when directly engaging with them, they will learn the sounds that appeal to them.

So basically, try to use words in context when talking and asking questions about the bird. For instance:

– Do you want a drink of water? (Point to the water)

When a bird takes a drink of water again be sure to say water.

Another example, if you give them a bath, talk to them about it.

After enough contextualized repetition, they may soon use those phrases to get what they want from you. There may be no specific time period.

Another tip is to create some “drama” or have the phrase associated with something of importance to it.

Teaching a parrot how to talk really depends more on how much attention they get from you. It may sound really boring, but you will have to repeat the focus word several times a day. At least an hour a day for a couple of weeks.

Basically, the more the better. Say it whenever you are around the parrot or cleaning its cage, feeding it, or petting it. Every chance you get and every opportunity.

Say the words a little slower than normal and always exactly the same way with the same tone.

When your bird engages in the desired repetition pattern, try to reward him with attention or a cuddle.

Find the favorite treat for the bird and reward for any attempts at saying the word (be careful with the number of snacks given). You can also wait for it to repeat in order to give the treat.

Whenever the parrot reproduces the behavior you want, you can use the clicker and give it a treat. You can find more details about clicker training on the web.

Go slow and be consistent

Don’t try to teach them complicated words or long sentences. If focusing on one word, only use that one for a while.

Choose one person from the family to teach

There is evidence that when a single person from the family teaches the bird how to talk, it is easier for the bird to pick up on the intonation.

Give them time to practice

A parrot might try out new words and sounds, perfecting them, before using them in front of an audience. They may be embarrassed to perform in front of you if they don’t feel ready yet. Remember, they see you as part of their flock. You’re very special to them.

Created by Irene Pepperberg, the model/rival technique consists of two human trainers. One parrot as the student. One trainer gives instructions (model) and the other trainer (rival) performs corrects and incorrect responses. The whole goal is for the rival to act as he’s competing for the trainer’s attention. The model and the trainer may also exchange roles.

How to teach my parrot to say hello

“Hello” and “Bye” are also the easiest words to teach, since they are easier to understand within a context. Say “Hello” to your bird every time you see him in the morning. Say “Bye” when leaving the room for the night.

How to teach my parrot to say its own name

Besides using repetition and other techniques as mentioned above, try to choose a two-syllable name for your parrot. Longer names are harder to memorize and pronounce. Try to avoid names that have “plosives”, (“b”, “p”), because parrots don’t have lips and it is harder for them to pronounce. Some common parrot names are:

What not to do when teaching a parrot to talk

At what age do parrots start talking?

Smaller birds can start to be trained around 3-6 months. For bigger parrots, it may take 6 to 12 months.

Why my parrot doesn’t talk?

It may be too young

Depending on the species, parrots don’t start talking until on average between 3 months and a year old, so if your parrot is still very young, they may just need some time.

Your parrot doesn’t hear you talking to others

Does your bird see and hear you talking back and forth with others? That might be a factor. For instance, there was testimony about someone who had a cat who grew up and lived for 12 years of her life in a monastery where the monks had taken vows of silence. Cats are normally quite verbal, using dozens of different sounds to communicate, but this little cat was mute, having never experienced her human family at the monastery talking.

Even if your bird listens to you speak on Skype or the phone, or listening to others converse back and forth on TV or online can help. Parrots will learn best through modeling and observing others.

Repeating the same focus word within context is essential! Don’t send your parrot confusing messages. Your “Hellos” need to have the same tone.

Also, try to not speak too fast.

Make sure there are no hanging toys obstructing their movement inside the cage. Only a happy bird will then talk to you, so make sure that his environment is rich.

It might be too early. Learning new things take time even for you.

If you talk constantly with your bird while in the same room, you might be amazed by how much they pick up on their own with no formal teaching. However, be ready to accept that some birds may never talk and that doesn’t make them less “lovable” in any way.