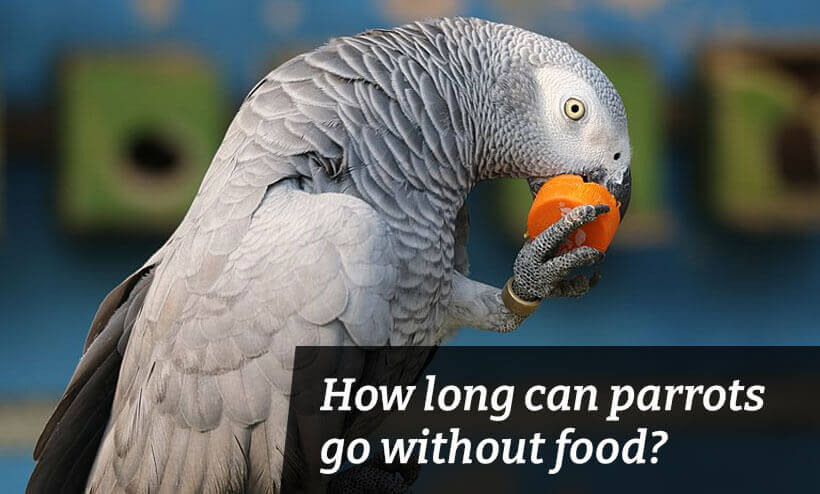 You just introduced a new food to your parrot. He’s not eating it and you may be wondering how long could it go without food.

Due to their fast metabolism, small birds such as budgies, cockatiels, and parakeets can get severely sick if they go more than 24 hours without eating. Large parrots, like macaws and African greys, can last for 48-72 hours without eating food because of their slower metabolism and higher body fat reserves.

The situation can get worse if the bird doesn’t have access to water. Most larger parrots can survive for 24 hours without water. Similarly, smaller parrots will succumb to dehydration in less than a day. That’s also the case for elderly, sick, or very young parrots.

What do you do if your parrot won’t eat?

It’s important to discover the reason as soon as possible. Below we listed a few possible reasons for birds not eating:

While your bird is not feeling hungry and you haven’t figured out the cause yet, try to provide him/her with a calm environment. Below are some stress factors to avoid:

If possible, move the perches lower so the bird spends less energy trying to move around while it’s weak.

How do you feed a bird that won’t eat?

Try to temporarily stick to their favorite foods and check for any additional changes in behavior. As mentioned, the bird could be sick and need to be examed by a doctor.

If your bird is a seed eater and not currently eating, try placing millets sprays in the cage which most birds enjoy.

Also, avoid force-feeding a parrot. You might hurt the bird and it will get even get pneumonia due to inhaling food. It’s best to look for a doctor that will know what to do.

How to introduce new foods to your parrot

Now, if you are trying to introduce a change in the birds’ diet, such as converting to a pellet food diet, below are some tips about things you can do to convince your parrot to eat.

At night, remove any and all foods from the cages when your bird goes to bed. First thing in the morning offers the birds new food in their current dishes. Leave the new food for 2-3 hours before removing it and replacing it with their old food. Repeat every day until you see your bird eating the food.

Disguise the new food with fined chopped veggies, like the chop mix recipe mentioned on our article What food should my parrot eat.

If you own a curious parrot who will check out anything in their cage, you can try taking leafy greens or strips of carrots and weaving them in-between the cage bars, hanging the food from the top of the cage like a toy, or even putting pieces of fruits and vegetables onto a kabob.

Birds are often flock creatures, and most being curious may be willing to try whatever you are eating. This can be as simple as eating food in front of them and sharing it, to making yummy delicious sounds as you eat, acting like you are going to share, and make the bird jealous. Finally, the bird will get curious as to what it is you are eating that is so good that you cannot share the food.

You can also use a teacher bird. Having another bird around that eats the new food might just be the perfect incentive to show your bird that the food is safe.

If your birds refuse to eat something, try to offer cooked versions in different shapes.

Will a parrot starve itself?

According to researchers at Stanford University, birds’ food preferences depend on what they ate as hatchlings. If a mature bird wasn’t fed a diet that included protein early in his life, he may be resistant to eating such foods.

In fact, they might be so resistant they could even starve to death. Birds can be really stubborn when adapting to new diets because they don’t see the new food as edible.

To prevent that, avoid an abrupt change in their diet. Try slowly adding the new food into the bowl in the course of several weeks.

In any case, watch if the bird is drinking water and pay attention to how much it is eating.

For seed-eaters, pay attention if the seeds are being eaten and the bird it’s not just “handling” it, without eating. It will only actually be eaten if the shells are cracked.

Occasionally a sick bird will appear to be eating but when the seeds are examined closely no shelled or cracked seeks are found.

It’s important to know that any change in the diet must be done with close supervision and monitoring or the bird’s weight.

What is an anorexic dropping?

If the feces part of the dropping is small and dark green or black or if the droppings have no fecal portion, it means your bird is not eating.

If your bird’s droppings are still anorexic at the end of the switching period, put your bird back on his old diet for 1-2 weeks, and then try the switch again.

Why is my new bird not eating?

When you bring a parrot home for the first time, it is a very stressful time for your bird. It’s a completely new environment, and it has no idea if it is safe yet. Some parrots react to such a big change by not eating. They will be on guard about everything until they feel it’s safe to trust again.

Give one or two days for your bird to get used to you. Don’t try to grab it or constantly put your hand on its cage. It needs to feel safe and secure and then it will start eating normally.

If you noticed it hasn’t eaten yet by day three, it’s time to take it to a vet, or even earlier if it’s a small bird, such as a cockatiel. If the bird is also not drinking water, take it to the vet as soon as possible.

How to tell if my bird is sick?

Below we put together some signs of illness to watch out for:

To conclude, always monitor the amount of food eaten every day by each bird, especially if birds are housed together. If it hasn’t been eating for a while, better to do watch out for other symptoms and bring it to a doctor if necessary.