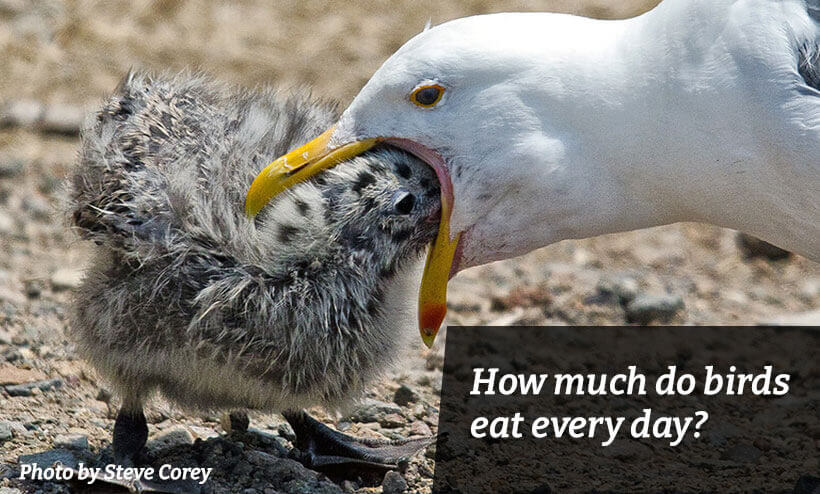 We usually think birds don’t eat much, hence the expression “eating like a bird”. However, have you ever wondered how much do birds eat every day?

How much a bird eats depends on the caloric value of the food, the size of the bird, and the environment it lives. Age is also another point to consider, as baby birds need to eat more.

Not really. Many birds eat twice their body weight in food each day.  In fact, a bird requires more food in proportion to its size than a baby or a cat.

In general, birds eat approximately half to a quarter of their total body weight every single day. As we mentioned, the smaller the bird, the more food it will eat because it doesn’t have a lot of extra fat to endure long periods without food. A passerine bird can’t afford to spend more than 24 hours without any food.

Birds eat more in the winter than in the summer due to metabolic needs. For example, Chickadees will eat 35% of their body weight every day to survive bitter winters. That means that if you weighed 150-pounds as a chickadee, you could be eating something like 600 granola bars a day.

Do birds eat until they are full?

Birds will eat more by the morning and slow down through the afternoon, but they will eat at any time of the day. Whenever there is food, there is more food to be eaten or stored for future meals.

However, there is a limit to how much food they can fit into their bellies. From their beaks, the food moves through their esophagus into their crops. The crop is the organ that stores excess food. If it’s too full, the bird might take a break from eating.

On the other hand, because have a fast metabolism, their digestive process happens quickly, which prompts them to eat again. Hence, the impression that they can’t ever stop eating sometimes!

Can you overfeed wild birds?

Yes! You should probably reduce how fast you fill your bird feeders during Spring or even remove it. According to professor Tore Slagsvold, “we risk making the birds accustomed and dependent on unnatural supplies of food.”

Not only do we risk birds getting dependent on us, but we also risk speeding their breeding times. One of the troubles of continuing to feed wild birds into spring is that it can incentivize them into nesting too early. Then their chicks hatch too early too before there is enough food for them in the wild.

Two exceptions to this rule are hummingbirds and goldfinches. During Summer, offer nectar to help fuel their high metabolism, and provide nyjer seed to your goldfinches—who nest later than other birds—until thistles go to seed.

How long do birds survive without food?

How long birds can go without food depends on several factors:

In a general sense, the smaller the bird and the more active it is, the quicker it will be to die without food.

On average, when in an active state, a bird with a bodyweight of 10%-20% fat, if not fed, will survive for 1 to 3 days. Similarly, if birds do not have stored body fat, survival time will be significantly reduced.

Penguins, on the contrary, have a lot of fat storage. In fact, the toughest bird in this category would be the male emperor Penguin. It can survive 3 months without food while protecting its eggs during the breeding season in Antarctica.

Bird’s endurance also depends on the time of the year. Birds eat more in the winter than in the summer due to metabolic needs. Food acts as a ‘furnace’ for them during cold days.

Larger predator birds like hawks, eagles, and owls can stand longer without food or water.

Additionally, birds will quickly turn into severe dehydration if their bodies are not hydrated for 48 hours, which greatly affects their survival time.

What bird eats the most food?

Hummingbirds are by far the hungriest of all birds. They consume more than 100% of their body weight to keep their ultra-fast metabolism going since they burn a lot of calories. To give you an idea, hummingbirds flap their wings 50 to 80 times a second!

According to National Geographic Explorer Anusha Shankar, a human would have to eat 300 hamburgers just to match the equivalent of what hummingbirds consume to survive every day.

How often should you feed birds?

It depends on how often and how many birds are coming to visit your birdfeeder.

As a general rule, it’s good to refill the feeder once a day by the morning, ideally at the same time, so the birds will know when to come. If you’re going on a vacation, try to progressively reduce the amount of food so they don’t think you mysteriously disappeared forever.

During Winter, it might be best to refill twice. Once by early mornings, when the birds need food at most, and before dusk, around 2 pm, or before it gets darker. This food boost before the evening will help them get through the night without spending their fat reserves.

As we mentioned before, it’s not necessary to feed the birds during Spring.

How much do baby birds eat?

According to Animals’ Jornal, Chicks that haven’t opened their eyes yet may take 5-6 feedings per day (every 3-4 hours). Once birds’ eyes open, they can have 3-5 feedings (one every 5 hours). As their feathers start to grow, they may be fed 2-3 times per day (every 6 hours). Their crops should appear full when they’re done.

If you’re feeding a baby bird, you should know if should be eating 10% of its body weight per feeding. Being a 500-gram bird would need 50 milliliters of formula per feeding. A baby bird this age should be fed approximately three times per day.

Nestlings can survive only 24 hours without food.

To conclude, the famous expression “eating like a bird” might be that appropriate, if you consider how much birds eat, especially if considering small passerine birds during Winter.