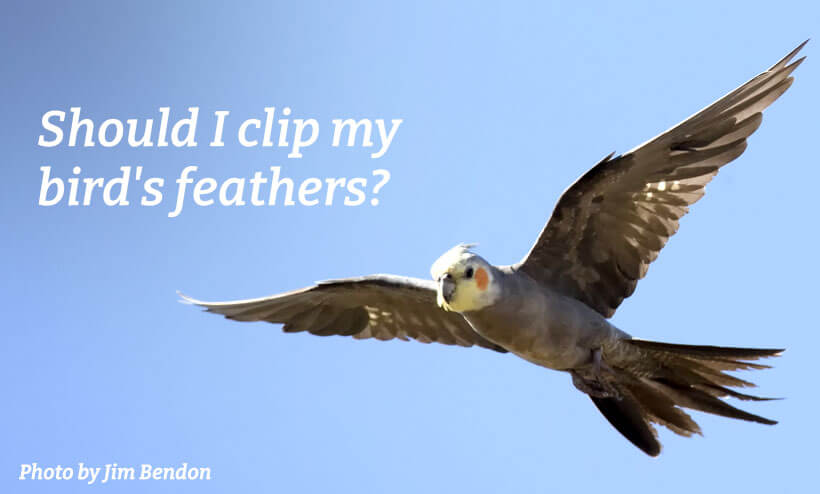 There are many reasons why some people decide to clip their bird’s feathers. Most of them do it for safety reasons so the bird won’t fly away. Others do it to restrain the bird from flying around the house or even to prevent lunge bites.

The main problem with wing clipping is that birds need to fly for exercise and mental stimulation. They will still try to fly and they might get hurt in the process, not to mention the psychological distress and the risk of damage to their growing blood feathers.

How do you trim bird flight feathers?

In case you have chickens, you probably witness them flying over to neighbors’ houses or going to places they shouldn’t be in general.

As chickens don’t rely on flying as often as other birds such as parrots, feather trimming might not affect them as badly. It could be a good idea to trim their feathers, although not generally recommended because they could get hurt when trying to fly.

If you’re really determined to clip your bird’s feathers, here are the steps to follow. If you are not feeling sure about the process, consider consulting an avian vet as your bird could get hurt if you don’t do it properly.

Steps to trim the bird’s wing

Reasons to not clip a bird’s wings

Below we have a list of cons explaining why you shouldn’t clip birds’ wings.

In fact, the British Small Animal Veterinary Association’s manual on parrots says that “Wing clipping should not be used as a long-term management tool for the convenience of the owner.” – Source

Flying is an important exercise

In nature, most birds use their wings all the time to get to wherever they need. As pets, they don’t get to move around. Instead, they are kept inside cages where they can hardly get any exercise. They are expected to sit on a perch all day while they are not being played with.

Some may say that getting a bird to flap its wings is “enough exercise”. But flapping wings rather than flying is not a sufficient mechanical load for an animal that naturally relies on a flight to get around. It does not provide the same exercise as flight.

And that goes even if a clipped bird seems to be doing some physical effort. If it is panting and seems tired afterward after flapping its wing. In fact, this is a symptom of poor physical fitness, the same way as a human who becomes worn out after walking a flight of stairs.

As a result, most pet birds will have health issues due to the lack of exercise. These issues can evolve into obesity and cardiovascular problems.

Risk of trimming more than necessary

When trimming the birds’ feathers you could accidentally cut the secondary feathers and even a blood feather. Breaking a blood feather can cause a lot of blood loss and pain to the bird.

Wing trimming is not permanent. However if when the bird is too young, there is a chance it won’t feel like flapping its wings. Their chest muscles won’t develop due to their inability to fly.

When clipped before learning to fly, they may never develop balance, agility, and other flight skills. It feels like being psychologically crippled for life.

Occasionally, if the trimming goes for a long time your bird will get used to not used to using its wings.

Not enough practice can turn any bird into a clumsy flier, leading to disastrous landings that may in fact hurt them.

A full-winged bird flies with control and confidence. Once clipped, the bird will not feel as confident as before.

It could trigger feather plucking

Frustrated by their inability to fly, clipped birds often develop psychological and behavioral problems, such as feather-plucking. Because clipping can cause irritation, birds will repeatedly pick at the feathers on the exposed cut ends occasionally which only causes more irritation and starts a vicious cycle.

Some people clip their parrot’s wings and bring them outside, thinking they won’t be able to ever escape. Nonetheless, a wing clip isn’t a guarantee you won’t lose your bird outside, so don’t use it as a false sense of security. If possible always use a harness.

Once clipped, a lot of birds have problems regrowing flight feathers. In the picture below, the flight feathers are exposed and unsupported due to a wing clip. In this case, one feather became damaged and began to bleed while the bird was flapping.

Why do people clip bird’s wings?

While some people argue against wing clipping, on the other hand, some vets and bird owners think that not trimming is exposing them to harm, since flying indoors could be dangerous.

Their main defending point is that clipping flight feathers properly is both temporary and not that stressful to the bird. Clipping would avoid unwanted roaming and exposure to dangerous situations.

With full-flighted wings, there is a bigger chance they achieve fast speed while flying. This could be harmful if they get spooked and hit a wall.

Bird clipping as a training mechanism

It takes some time for birds to realize that their primary wings are gone. Once they tried enough times, they might realize they depend on their owners to get around and will be more reliant on the owner in general. This could be useful when you are trying to teach your bird how to step up on your hand.

However, this technique could fall short depending on the case. Some birds will lose trust on their owners after trimming. They will avoid them and even bite if they feel cornered and threatened.

Rest assured, you can still train your bird to respond to commands regardless of its wings are clipped or not.

How far can a bird fly with clipped wings?

It can’t gain propulsion and speed, so it won’t fly upwards as much as it would.

Does clipping wings hurt the bird?

Physically, no. If the clipping is done properly, it doesn’t hurt the bird.

Can a bird with clipped wings ever fly again?

If the clipping was done properly, it probably will fly again. If the clipping has gone wrong and the bird was young, there is a chance it might not be able to fly again as well as it would if it wasn’t clipped.

The reason is that severe clipping causes the bird to not feel like flapping its wings and be afraid of trying to fly. Additionally, the wing muscles weaken for the lack of use, which turns the situation even worse.

How long does it take for flight feathers to grow back?

The feathers will grow back when the bird molts, usually once a year depending on the species.

Is clipping the bird’s feather cruel?

Physically, if done correctly, trimming a feather is like cutting a nail off. However, considering emotionally, the story might be different.

Some people feel wing clipping is a cruel or unhealthy practice, as it denies a bird its most natural way of moving around, obtaining exercise, and avoiding fearful situations.

If the bird is like a parakeet and relies on flying a lot, clippings its wings will affect its behavior.

You might not hurt him physically, but you might hurt him emotionally. It’s like loving to play the piano and then somebody comes and cuts your hands off. There’s a sense of void that causes anger and frustration and could trigger behavior problems.

Not only that, but clipping wings make birds more insecure about flying. Clipped birds don’t fly with the same confidence and fluidity.

What to do instead of wing clipping?

Training your bird to respond to commands such as “stay” and “come” it’s a really useful technique to avoid issues. The training itself is an excellent way to bond with your bird.

Bird-proofing your home and training everyone in your household to watch out for certain actions while the bird is out is also a good strategy.

If you know that your bird gets spooked by something on the window, consider a curtain.

Closing all doors to other rooms, taping the window glass with a few marks, avoiding mirrors on the area where the bird hangs out, not bashing doors, avoiding ceiling fans, etc.

Little things like this make your home safe for your bird without any need to clip its feathers.

Bring your bird to a flight club

The same you go to a gym, your bird can go to a flight club!

Once your bird is trained and more confident with flying, you can bring it to a flight club. A flight club is an indoor area where parrots meet to do what they know best: fly!

It’s a really fun and social environment, great for enrichment. There are a few flight clubs in North America your bird can enjoy.

Eventually, if your bird is extremely well-trained, you can teach it how to free flight. Use a bird harness in this case.

Overall, allowing birds to exercise the way nature intends them to might be the best approach. Flying accidents will happen regardless if the bird is clipped or not.

Most of the time, clipping a bird’s wings is cruel and unnecessary, a convenience for humans that backtracks in the long run.

When clipped, birds don’t feel confident to fly. As a consequence, they don’t exercise as much and get cardiovascular problems, not to mention all the behavior problems that could bring.