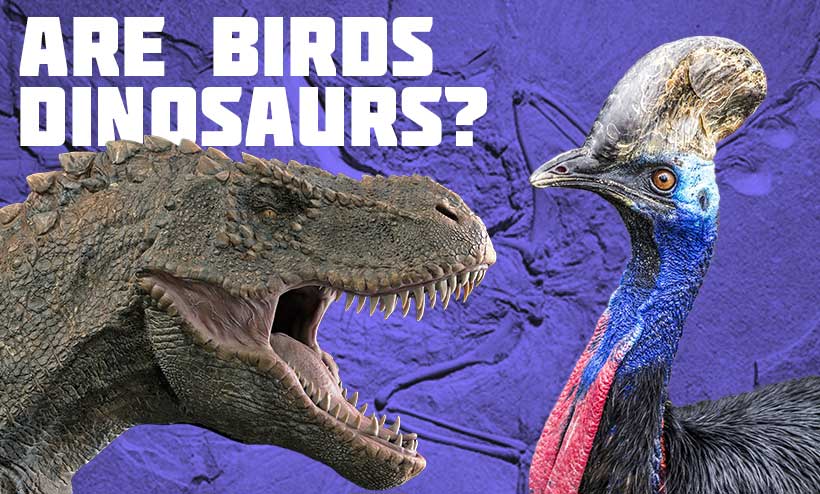 You probably heard somewhere someone associating birds with dinosaurs.

Birds have certain traits that lead many scientists to believe they are modern-day dinosaurs. The scaly feet might be one of the indicators, but have you ever wondered how many dinosaur genes are in a chicken? Here in this article, we will discuss if dinosaurs evolved into birds.

The truth is: “Yes! Dinosaurs are to birds as apes are to humans. Birds evolved from dinosaurs, and therefore are dinosaurs.

The first bird’s ancestors came from a dinosaur family called Theropods. They were the largest terrestrial carnivores dinosaurs, and that includes the Tyrannosaurus rex on the list.

That means that a chicken, for instance, shares a surprising amount of DNA with the most fearsome dinosaur that ever inhabited Earth!

The evolution from Theropod dinosaurs happened during the Jurassic (around 165-150 million years ago), and their classic small, lightweight, feathered, and winged body plan was pieced together gradually over millions of years of evolution.

Recently, scientists were able to extract and sequence proteins out of a well-preserved T-Rex bone. They compared it to many other animals, and to no surprise, they closely matched birds.

How did the bird ancestors survive the mass extinction?

As you may know, around 65 million years ago, an asteroid hit Earth and completely wiped out most terrestrial creatures. The asteroid created a massive cloud that covered up the sunlight and led Earth to the Ice age.

It is said that the Theropods, the bird ancestors, survived the mass dinosaur extinction by mostly burrowing into the ground or hiding in the water to escape the initial heatwave. During the following cold years, they survived by eating smaller prey.

Here are the main points that contributed to their survival:

The enormous dinosaurs such as Diplodocus and Apatosaurus would never have survived after the fall of the asteroid. They were too big to seek shelter and needed way too much food.

Small creatures breed faster. This means they adapt quickly to new situations. In the end, only the smaller dinosaurs from the Theropod family survived. They evolved into a continuously smaller size over the course of 12 separate mutations or an evolutionary trend spanning more than 50 million years.

The bipedal posture, hinge-like ankle, hollowed bones, and long S-shaped neck of birds were inherited from deep dinosaur ancestors. The wishbone (furcula) and three-ﬁngered hands of birds ﬁrst appeared in primitive theropods. The reversion of the pubis and occurred in maniraptoran theropods. The ability to fold the forearm against the body evolved in paravians, closely related to birds.

The size of the larger dinosaurs came from the need to eat the taller trees and kill the bigger herbivores. When the asteroid wiped out the presence of the sun for a few decades, the large size was not advantageous anymore.

The omnivores (evolved the Theropod family) survived because they didn’t require a large body to digest plants, like herbivore dinosaurs. They could eat any kind of food (fish, meat, plants, insects). Then, being a non-picky eater, having a compact body, and eating smaller meals meant more chances to survive and that was essential in the Ice Age.

The variation in the bird ancestor’s diet also meant the evolution of several different types of beak shapes.

Another reason for the modern bird ancestors to have survived the mass extinction was flying. Flying takes less energy and it represents a vast advantage when compared to larger herbivore dinosaurs’ slow walking pace.

Mobility was quite important when considering how dangerous Earth was after the asteroid hit. Food became scarce due to clouds that emerged from the explosion and covered the sunlight. That demanded more distances to cover in order to find food. Frequent eruptions were also another danger to take into consideration.

The Archaeopteryx, which is accepted as being the oldest known bird (dated 150 million ago), is a relevant link between birds and other dinosaurs.

Unlike modern birds, Archaeopteryx was the size of a raven, bore a full set of teeth, a flat breastbone, a long bony tail, and three claws on the wing (probably used to hold prey). It was probably a predator.

Archaeopteryx had feathers, probably used for body temperature regulation and they may or may not have been used for flight. According to Christian Foth, a paleontologist at the University of Fribourg in Switzerland, “Thus, it is very likely that Archaeopteryx could fly, but it is hard to judge if it was a flapper or a glider.”

The first fossil was found in 1875 in Germany, residing now at the Museum fur Naturkunde.

Did dinosaurs have feathers?

We all seem to think that dinosaurs are reptile-like scaly creatures due to the famous blockbuster Jurassic Park, released in 1993. The film producers designed the dinosaur’s appearance referencing recent fossil findings dated back to 1993.

Had the film producers waited a couple of years, they would have to work with a completely new look for the dinosaurs due to new fresh fossils findings.

In the 1990s, an influx of new dinosaur fossils from China revealed plumage, from fuzzy bristles to fully articulated quills. This discovery suggests that feathers must have evolved in dinosaurs long before birds developed.

There are some researchers that disagree about the link between birds and dinosaurs and prefer to work with the hypothesis that birds came from reptiles.

In fact, birds do have some similarities with reptiles. Like reptiles, birds have scales on their feet. Also, feathers are produced from tissues that resemble those that produce scales. There are also some anatomy similarities (muscles, brain, heart).

However, these researchers haven’t been able to confirm this theory because they were not able to find a strong connection between birds and a member of the crocodile family during the Triassic age.

Dinosaurs, birds, and crocodiles share a common ancestor named Archosaur, which lived on Earth around 350 million years ago during the Permian Period. Starting at the point of the common ancestor, the evolutionary line grows upwards, branching out at crocodilians (crocodiles and alligators).

This means that even though birds are considered the only “modern” dinosaurs, there are other animals that share connections with ancient animals. For instance, turtles, crocodiles, and snakes share some DNA with ancient ancestors from the Cretaceous period (145 million years ago) that derived from the Archosaur.

It’s amazing to look at all the similarities between birds and dinosaurs! Considering the connection, that means we have over 10,000 species of these dinosaur relatives among us today!