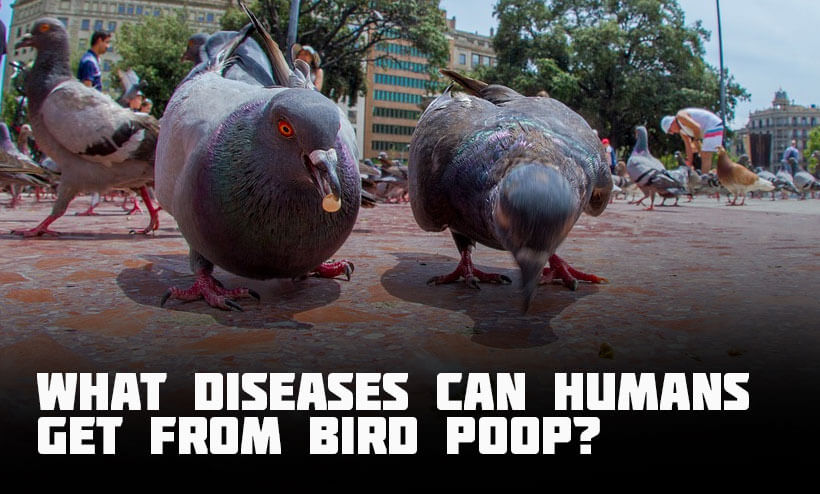 Depending on the circumstance, you can get diseases from bird poop. Some of them are:

Below you see more details about these diseases derived from bird poop:

You can catch Psittacosis if you inhale the bacteria, usually from dried droppings and mucous and feather dust from infected birds. It’s considered a rare infectious disease caused by a bacterium called Chlamydia psittaci. Symptoms are commonly a flu-like illness and pneumonia usually appearing 5-19 days after exposure.

What are the signs and symptoms of psittacosis?

Sick birds may have signs such as:

Please bring your pet bird to a vet if you verify these symptoms. This can be a fatal disease for the bird and dangerous to you.

According to this Health page from the Australian government, to prevent Psittacosis:

If you are handling a large amount of bird poop in the soil, there is a chance you might breathe in a fungus that that causes histoplasmosis, which can lead to severe infection if your body’s defense is lowered. This fungus is present in the Eastern United States and in parts of Central and South America, Africa, Asia, and Australia. People can get histoplasmosis by breathing in the fungus from the air in these areas.

Symptoms of histoplasmosis include:

Bird flu is a rare type of influenza virus. The H5N1 and H7N9 strains are known to be fatal to humans. Several outbreaks have happened in Asia, Africa, North America, and parts of Europe. People got sick because they got in contact with sick birds.
The risk of contamination is higher in areas where eggs and birds are sold under unsanitary conditions. Undercooked poultry meat and eggs from infected birds can transmit the disease. Always make sure to fully cook poultry meat and eggs (yolks and egg whites need to be firm).

Candidiasis affects humans and birds. Pigeons are the birds mostly liked prone to transmit the disease to humans. The disease affects respiratory organs caused by yeast growing in the pigeons’ poop. This infection most of the time affects the mouth, urogenital tract, and intestine.

Cryptococcosis is an infectious disease caused by a fungus found on soil and bird poop, especially in pigeons.

The transmission happens via breathing fungal spores and the disease can get serious on people with a low immune system defense, affecting their lungs and nervous system.

To avoid the disease, do not feed nearby pigeons near your house and do not allow them to roost/nest in your house.

If you happen to have to clean pigeon’s poop, wear disposable gloves and a mask. Breathing the dust from their droppings can be dangerous.

St. Louis Encephalitis is an inflammation spread by mosquitoes that have infected birds. As consequence, the bird droppings are also infected. Most of the time, the mosquitoes bite sparrows, pigeons, and house finches. The disease causes drowsiness, headache, and fever. In severe cases, paralysis, coma, or death. It’s especially fatal to people over the age of 60 years old.

The first symptom of Salmonella on wild birds is when the bird suddenly appears ‘tame’. It is lethargic, fluffs out its feathers and it’s easy to approach. For pet birds, pay attention to the three ‘Ds ‘: depressed, drowsy, and diarrhea.

It’s rare, but it’s possible for Salmonellosis to be transmitted from birds to humans. In humans, Salmonella usually manifests itself as food poisoning. The symptoms of Salmonella in humans generally present themselves within 12 to 72 hours of infection and can include, nausea, vomiting, abdominal cramps, diarrhea, fever, chills, headache, and a presence of blood in the stool.

The disease can be transmitted to humans through:

Birds feeders are a hotspot for Salmonellosis contamination. Always wear gloves and wash your hands after handling birds, bird feeders, or birdbaths.

E.coli infection is caused by an enteric bacteria, traced back to fecal matter. The transmission from bacteria to birds happens when birds hang out on areas where the bacteria sits on. Usually polluted waters and cow manure. Consequently, contaminated birds will poop and the droppings can land on human food sources or water supplies.

Bird fancier’s lung, or bird breeder’s lung is a form of hypersensitivity pneumonitis is due to antigens in bird droppings. In all these cases, the subject experiences flu-like symptoms, with productive cough and weight loss.

Ringworms are caused due to fungus that resides on the dead outer layer of the skin or can inhabit hair or nails that grow from the skin. If a bird has been infected with ringworm there is a possibility that the bird poop might carry the infection and it is likely to be passed on to other animals. Also, inhaling dust from dried bird droppings of infected birds can cause ringworms.

Yes, but it does not easily infect people.

How to avoid catching diseases from bird poop

To summarize, it is important to take some measurements to avoid getting diseases from bird poop. The diseases can come in several different types of transmission, from direct contact with bird poop to breathing into an enclosed area that has contaminated air circulation.