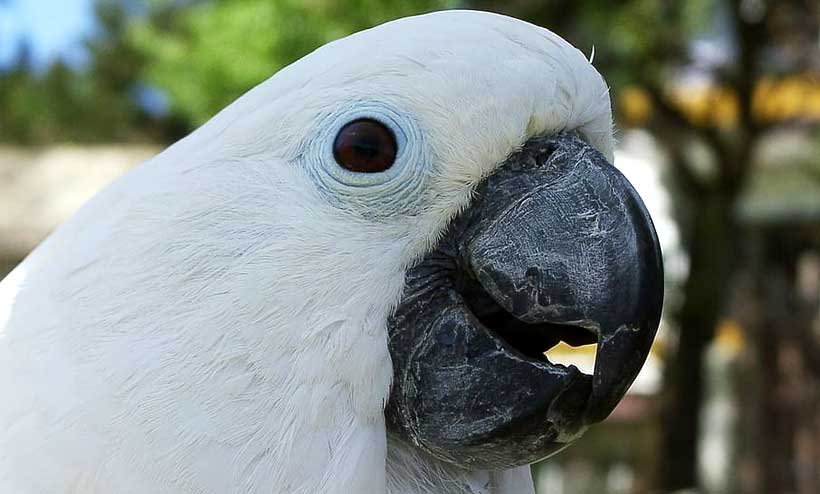 When you hear a parrot or a bird talk, why may wonder how can they talk and other birds can’t? Even, why can’t monkeys talk if they have so many similarities with us? We’re going to discuss this topic in this article.

Parrots have a brain particularly good at vocal mimicry, besides having articulate tongues. However, the biggest motivation for a parrot to talk is considering their human owner as a part of their flock, meaning they tend to do what they can to mimic the speech of their beloved ones.

How is sound produced on humans and birds?

Both humans and birds’ respiratory systems are organized in a way where the top part is the trachea and the bottom part is the lungs. These two parts together are responsible for moving air in and out.

In humans, the voice box is called the larynx and is located above the trachea. It contains vocal “folds” that vibrate when air flows, producing sound. The mouth’s job is to shape that sound.

In birds, the voice box is called “syrinx” and is located at the bottom of the trachea. That way, instead of sending air through vocal folds, birds control their shape sounds through muscles on the walls of the syrinx.

Notice that when birds chirp, their chests vibrate along. The opening of their beak and the shortening of their neck helps to refine the noise.

Excellent use of air

How do birds make two sounds at once?

Songbirds are able to use the left and right sides of the syrinx separately. It’s like singing with two independent voices. While switching sides, they can create different pitches. The left side creates a high-pitch tone, whereas the right side produces a low-pitched tone.

Birds also have specific muscles to control the movement of the syrinx, including the tension on the membranes. They have the ability to vary in loudness and frequency (pitch) of sounds by varying the air pressure that passes from their lungs to the syrinx and by tweaking the tension they use on their muscles. Songbirds even have specific regions in their brain that control song production.

The Brown Thrasher is capable of singing two sweeping tones simultaneously and a great example of this two-note technique. This bird may have the largest song repertoire of any North American songbird, which has been documented at least over 1,100 songs.

How do parrots talk?

Like other birds, parrots use their chests and their beak to mimic human speech. However, parrots have articulate tongues, capable of moving around and shifting frequencies to make human-like vowels.

Parrots can create new vocalizations (vocal learning), possibly because they have a unique brain that is particularly good at vocal mimicry.

Obviously, parrots don’t have lips, so how can they reproduce “b”, “p” sounds?

To make up for this, parrots use something called Esophageal Speech, which is basically something similar to burping coming from within their trachea.

Parrots are the only birds having this much effort to mimic human speech. They have a natural desire to communicate. The fact some parrots live in captivity and developed strong bonds with their owners suggests that this social bond was enough to make parrots go the extra mile to learn how to communicate with humans.

When parrots live with humans, humans become part of their flock and they’re are obstinate to sing our song.

We might have a vote against the common folk expression, “bird brain”, which is implied that someone doesn’t have a bright mind. In truth, birds are capable of doing much more than people usually think.

Hummingbirds, songbirds, and parrots have 7 clusters of neurons in their brain called song nuclei. Scientists believe this section is responsible for their vocal learning. Vocal learners can generate strings of sequences with limited complexity.

However, later scientists discovered that parrots have an extra layer around the song nuclei that make them unique. Something similar to a chocolate coating in an apple if we were to make an analogy.

Most of the bird’s vocal learning brain regions are tucked into areas that also control movement. These areas in parrots also show some special patterns of gene expression, which the scientists speculate might explain why some parrots are also able to learn to dance to music.

Mimicking the noises of other species

Some birds are capable of mimicking the noises of other species or predators.

The Fork-tailed drongo, for instance, has the audacity of pretending to alert others about approaching predators, just so he can use this false alarm to scare the competition away and stuff their bellies. It is reported that this species can mimic 45 warning sounds from other species.

Another example is the Steller’s Jay, which mimics the Red-tailed hawk in order to prevent other predators.

Birds can be great mimics and have a wide variety of repertoire, with as many as 200 to 2000 unique sounds that they can reproduce.

They can mimic all kinds of noises, such as:

Below there is a list of the best bird mimickers in no particular order:

Can parrots speak within context?

Rather than simply “mere” mimicry that lacks cognitive complexity and intentionality, the doctor argues that parrots are capable of communicating to reach a goal.

How intelligent can parrots be?

With special training from doctor Irene, Alex was capable of using phonetic “grammar” to reuse labels from a finite set of elements. For instance: “I want X”, “I wanna go Y”, within proper contexts. He could talk more than 100 vocal labels for different objects, actions, and colors and could identify certain objects by their particular material.

Alex had math skills that were considered advanced in animal intelligence, even developing his own “zero-like” concept, in addition to being able to infer the connection between written numerals, objects sets, and the vocalization of the number.

Parrot smarter than a Harvard Undergrad

In a recent study, Griffin, another African Grey parrot from Doctor Pepperberg, was able to outperform humans on given moments.

The test consisted of testing the visual working memory system through shuffling colored pom-poms in covered cups. The position of the cups was swapped 0-4 times and 2-4 different colored pom-poms were used. Griffin was able to outperform the children and even Harvard undergrads!

Dinosaurs may have been smarter than we think

As mentioned before on this blog, birds are descended from dinosaurs. Because of that, and because of the fact that there are indicators that prove that birds are capable of demonstrating intelligence, it is a possibility that dinosaurs might have had some level of cognitive development.

How to train your bird to talk

Before you train your bird to talk

First of all, it’s necessary to mention that you should not have a bird just so it can talk. There are several reasons to have a bird, but to satisfy the ego of owning a “talking bird” is most definitely not the most legit one. Parrots should be loved by what they are, and not by what they can do in terms of tricks. They are lifetime companions and everyone willing to own a bird should know that.

Some birds will simply not learn

Another point to be made is that some parrots will simply never learn how to talk. Maybe because they are not interested or maybe because they have some kind of issue (neurological or vocal related) that might affect that.

Am I okay with repetition?

Before teaching your bird, also reflect if you are going to be okay with the bird repeating sounds over and over. Listening to “Hello” several times a day can be overkill for some owners, so it’s good to be aware of that.

The best way for a parrot to have chances of learning how to talk is to learn at a young age, be properly trained, and to have a strong social bond with their owner.

Ravens, for instance, can only learn how to talk during their critical period, when their nervous system is especially sensitive to certain environmental stimuli. If for some reason, this organism does not receive the appropriate stimulus during this period to learn a given skill or trait, it may be difficult, to learn after. In fact, the same happens to humans. Older learners of a second language rarely achieve the fluency that younger learners display.

Also, it’s relevant to know that some bird species will speak more clearly than others, and that personality also will play a role in the teaching process. Each bird is a unique individual.

Best techniques to teach a bird how to talk

The best technique to encourage your bird to talk is talking to them. Repetition is key, especially while strengthening bonds with your bird. Remember, it’s a lot of effort for a bird to learn how to talk. The bird needs to consider you as someone part of their flock so it is motivated enough to want to communicate with you.

Birds can also learn how to talk on their own by listening to things on their surroundings, as long as there is some repetition.

Repeat back to them

When your bird engages in the desired repetition pattern, try to reward him with attention or a snack (be careful with the number of snacks given). You can also wait for it to repeat in order to give the treat.

Go slow and be consistent

Don’t try to teach them complicated words or long sentences. If focusing on one word, only use that one for a while.

What not to do

Created by Irene Pepperberg, the model/rival technique consists of two human trainers. One parrot as the student. One trainer gives instructions (model) and the other trainer (rival) performs corrects and incorrect responses. The whole goal is for the rival to act as he’s competing for the trainer’s attention. The model and the trainer may also exchange roles.