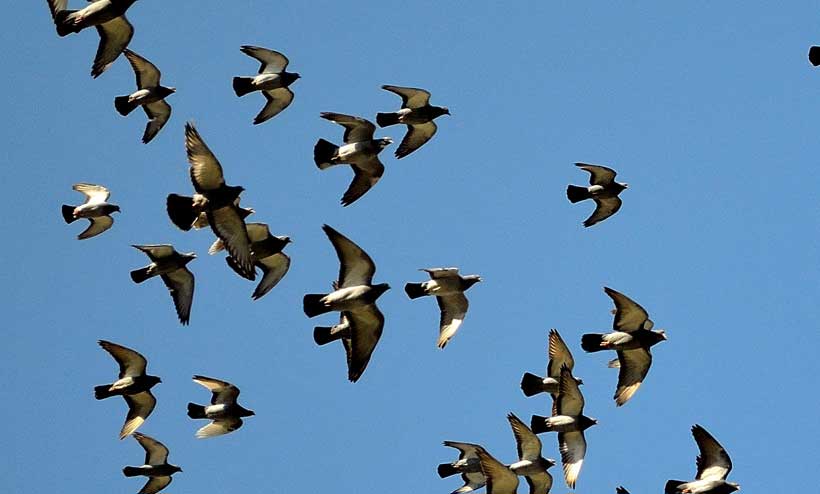 You’re drinking a beer at the patio, and then, you realize there is a group of pigeons flying in circles and you wonder: What does it mean when birds fly in a circle?

There are many reasons why birds fly in circles:

Flying in circles to confuse a predator

Remember how schools of fish move together to evade sharks and whales? Birds can use this same tactic but in the air! The birds stay in a flock flying in circular patterns, swirling around, because this makes it more difficult for a predatory bird to choose a target. While trying to figure out which target to focus on, predators waste time and the prey can get away. Indecision can be costly and the power sometimes is in the numbers!

Additionally, when one of the birds is startled by something, it reacts with alarm. Others all see, and likewise react to – so they all take off. But if everything is okay, they resettle again since there was no danger.

Everyone can commit mistakes while trying to find directions. Even birds! A solution to figure out where to go can be to fly in circles. It can be a good technique to orientate themselves for navigation purposes.

Flying in circles to find food

Once I watched a group of Stellar jays flying in circles like crazy, performing amazing acrobatics in the air. I thought the birds were just having fun together. Later on, I realized they were actually hunting invisible insects together and using speed in their favor.

Other birds, such as hawks, fly in circles to figure out potential food sources several meters away from distance.

Flying in circles as a way to save energy

Flying upwards can be a very extraneous activity on its own. When flying in a flock, birds potentialize the use of updrafts to gain altitude and fly effortlessly. This can be particularly useful when flying long-distance flights while migrating, especially over mountains. The circle “formation” can be a way to attract more birds to join the flock so they can all save energy together.

For larger birds that do not necessarily fly in groups all the time, flying in circles is a way to scout the area for updrafts. It can take much energy for large birds to flap their wings. They have to search for an updraft that can take them very high. From there, they can sore to find another updraft.

For vultures, flying in circles is a great solution to stay high up while they look for food. At the same time, they keep an eye on other vultures in case they find a food source.

What kind of birds fly in circles?

Most birds are prey animals. They use the act of flying in groups to confuse predators, as well as a way to save energy while flying upwards. Some examples of prey birds that fly in circles are pigeons and starlings.

Starlings use this technique to create random patterns, in a process called murmuration. It’s a common practice, especially when starlings are gathering together before a migration process. They use their patterns as a way to “invite” more birds from the same species, so they can gather massive flocks. All done to save more energy while flying together.

In the video below, you can admire their majestic synchronized flying. For them, it’s easier to fly without crashing into each other. It happens because they are small and can adjust easily to turbulence when lightly touch each other’s wings. It’s believed that the starlings are capable to anticipate the move or change in direction as a whole. That is because they have a large field of view, not focusing on the bird next to them, but rather what’s happening several feet away.

Another kind of bird that flies in circles is hawks and vultures. The big difference is that these birds do this more as individuals. They can get a good view to spot prey or a carcass on the ground since they have good eyesight.

Why do birds hover in one spot?

Birds such as vultures have an excellent sense of smell. Scent travels through the wind. That means vultures might hover over in one spot to pick up a scent trail and find food.

They might also be analyzing the environment to make sure it is safe to fly down. For instance, maybe there is still a large predator around or the prey might still be alive and enable to attack if the bird approaches. It could be a very costly fatal error if they are mistaken, so vultures prefer to be careful.

Flying in circles is also another way of communicating to their fellow vultures that they found food. Because they don’t have voice boxes, spotting a visual cue, such as your friend vulture flying in circles a few kilometers away, is a great way to find food.

To conclude, flying in circles hardly counts as a waste of time. It probably means they are trying to run away from danger or scout for an air current or find food.