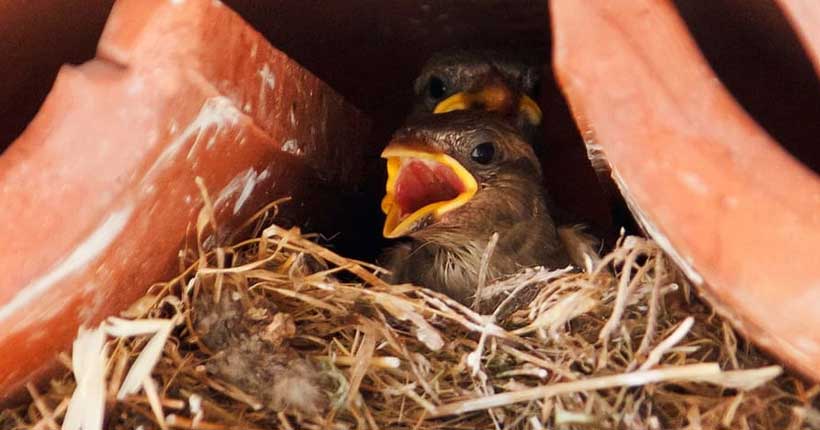 Nature can be messed up sometimes. Have you ever wondered why sometimes mother birds throw their chicks away or abandon their nests? In this article, we’re going to uncover the truth behind this macabre act.

The main reason is that mother birds abandon their baby chicks is to enhance the survival probability of her other chicks. They sense something is wrong and they can’t raise their all of their young successfully. So if they see a chick that seems sick, they will prefer to give better nourishment to the healthier ones and throw out the one that they think it is not going to make it.

Food is a limited resource that parents need to manage well in order to increase the chances of survival. On average, a baby bird should eat every 15-20 minutes or 15 hours daily. There is a lot of work!

The survival of the strongest chick

In fact, many birds will throw the weakest of the bunch out if they have too many chicks to feed. There’s even some species where the biggest chick will kill it’s siblings to get more attention from it’s mother.

Golden Eagles, for instance, breed rarely and when they do, it’s only two eggs per nest. As you may guess, eggs don’t usually hatch all at the same time, which gives a large advantage for the chick that hatches first. He will grow bigger and usually win most squabbles for food, which may lead the younger sibling to die from malnutrition.

If food becomes really scarce, there is a chance the firstborn might even devour its younger brother, without the parents doing anything to protect the youngest.

Stomach-turning, right? The reality is the in the fight for survival in the wild, animals need to be practical. The dead chick will provide a hearty meal for the oldest and reduce the workload for the parents in a long term. Most times, the chances of survival of the second chick are only 20%.

Other reasons for birds abandoning their chicks

Who looks at this cute house finch would never imagine the mothers sometimes can eat their own offspring! Some zoologists believe that these birds might do that in a way to root out offspring that takes too long to mature, cutting off the time needed for parental care. As a consequence, the competition within a species speeds up eggs to grow faster.

Eggs especially might be abandoned if the incubation instinct on mother birds is weak or absent.

The parent or parents might not come back because they have died.

4 – Father abandonment and kill by jealously

To be a house sparrow means having a really strange life. Basically, males are casual males- they make some kids and then leave with another female. Nothing strange over here… but then, females are jealous. And as you know, jealousy leads to some killing…  I mean, literary. Females are keen to seek out nests of other females that mated with her partner and kill the resulting chicks.

Why is that? Well, for the father to spend more time with the rest of his kids. Who would wonder that bird cheating could have so much drama?

There is also a chance bird parents are being tricked by another parent bird to raise their chicks. They’re called brood parasites. They lay eggs in the nests of other bird species. In North America, various species of cowbirds do this. In Europe, it’s cuckoos. The foster mother thinks the cuckoo chick is one of its offspring and raises it.

Depending on the species in question, the parasite mother may destroy or eat one or more of the host bird’s eggs, or the parasite chick may kill one or more of its foster-siblings. Some parasites are so ‘lazy’ they don’t even build their own nests, hoping to take advantage of their host hard word.

Alternatively, if the host parents discover the parasite egg and realize what it is, they may destroy the egg or abandon it (abandoning any remaining eggs of their own, too). It’s all about competition for limited resources. But brood parasitism doesn’t always work out so badly; parasitized nests often fledge both parasites and host young.

Throughout time, this might trigger an evolutionary race between parasite and host as the pair of species coevolve.

In some cases, Great spotted cuckoos can actually help their host family. When sharing a nest, they release a substance that repel predators.

Will a mother bird abandon its chick if I touch it?

There is a common belief or old wives’ tale that if humans touches a baby bird the parents won’t take them back. The truth is that birds don’t use scent as a means to find food, they rely mostly on sight.

They don’t care what the baby smells like and probably don’t even smell “human” on them. The sense of smell is the least developed sense for most birds. So if you put a baby bird back into its nest, the mother rejects won’t reject it. Most of the time, you are safer putting the baby back in the nest than any other course of action.

If a young baby falls out and you can’t reach the nest then nail a plastic butter tub or the like to the tree with some grass inside and place the baby in. Parents will continue to feed it.

Mother birds are not the only ones to throw away babies

It’s not only birds, many animals also resort to this kind of activity. And sometimes the mother even eats its own kids. Here are some examples below.

If too stressed or overwhelmed, hamsters might eat their own babies.

Since the deterioration of the Global warming, Polar bears have been spotted eating their own bearings.

Some spiders are known for cannibalistic behavior. On the contrary, Wolf Spiders actually sacrifice their lives for their offspring. The babies eat them so they can have their “hunting spirit” awakened.

It can be hard for us humans to understand why a mother bird abandon its own chick, but we have to keep in mind that it is hard to survive in nature with limited resources available. Their survival is their first instinct, and even if it means that to protect their offspring they have to get rid of one of their baby birds.

Bird Vibes was created because we love birds and we love art! Drawing bird merch was a good way to combine these two into a fun way to support our families and also help the bird sanctuary, Greyhaven Exotic Birds that we enjoy volunteering for.